"Chapter Fourteen: A Kiss Before Dying"

This article is a stub. You can help The CW Wiki by expanding it.

The season aired on Wednesday nights at 8:00 p.m. prior to Dynasty in the fall and winter, and Life Sentence and The Originals in the spring. 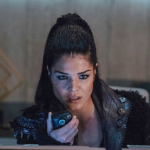